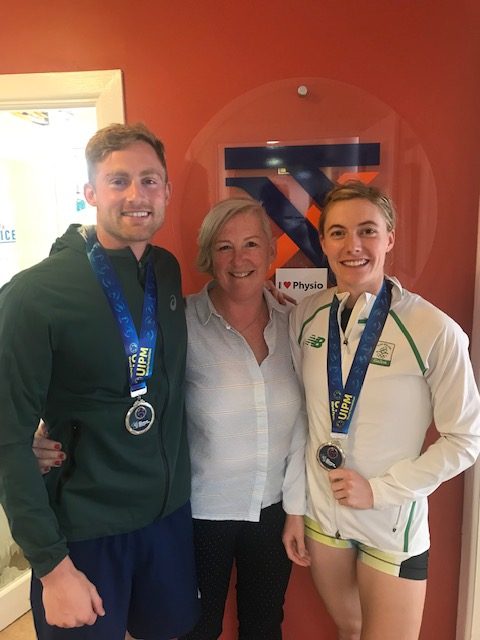 On recommendation from the Medical, Scientific and Player Welfare Committee of the GAA, a National Injury Database was set up in 2006. Detailing injury rates for 5 inter-county football and 4 inter-county hurling teams in the 2007 season, the first report was published recently. Funded by the GAA and written for the GAA by two Chartered Physiotherapists, John C. Murphy and Catherine Blake, this comprehensive annual report on all injuries sustained by top GAA players last season.

Exercise and sport is recognised as a major contributor to wellness at every age. Injury often stops sports participation for a short period, sometimes permanently. Many factors contribute to sports injury, but it is important that records specific to each sport are kept and analysed so that causes can be addressed and risks reduced or prevented. In the sporting arena, it is the evidence that emerges from high level athletes that in the main informs how doctors and chartered physiotherapists treat the leisure sports person.

GAA is played in every parish in the country. The findings of such reports percolate right down to local level and have implications for team selectors, coaches and the medical and paramedical professionals who have each a role to play in player welfare.

This ground breaking report, the first ever to give a clear picture of all injuries sustained by these elite GAA players over a full season produced some key findings including:

Though a range of muscle, ligament, joint injuries and bone fractures (broken bones) were reported, the prominence of hamstring injuries means that doctors and chartered physiotherapists are now developing a protocol to reduce frequency of occurrence, including guidance for coaches, evidence based advice for early treatment of this injury, a comprehensive rehabilitation programme and steps for return to training and match fitness.

Further analysis is due to look at exactly when the first or recurrent strain occurs, whether in training or in a match situation, early in the season or towards the end of the Championship, and even the time within each session when the injury actually came on. The more detailed the evidence, the more education can be provided to players, coaches and also all health professionals involved on a local level in the care of GAA players.

Hamstring injuries range from a slight strain or tightening sensation in the back of the thigh to the more serious partial tear, where the muscle can take a long time to heal. To the leisure club member, a hamstring strain used to be considered a straightforward injury. However from research across many sports we now know that full assessment of the whole lower limb right up to and including the lumbar spine is necessary for all hamstring injuries. Often there may be several reasons that contributed to this injury and unless each is spotted and addressed the chance of break-down on return to training is very high, as shown in the GAA report.

One reason for hamstring strain is the scientific evidence that regional muscle imbalances create a likelihood that injury may occur. In this case poor ‘core stability’ (a weaker lumbar region with very strong thigh muscles) is a significant precursor to some hamstring injuries. Again within the lumbo-pelvic area, either a stiff lumbar region or tight hamstring muscles can contribute to mechanical dysfunction. The role of poor foot biomechanics, mostly in terms of what is known as ‘functional flat feet’ also needs to be included.

Thus, even in an apparently simple, first-ever hamstring injury, there are several different strategies to assess and treat to ensure full recovery. In a recurrent situation, locating and fully rehabilitating each factor is even more critical. Less than complete rehabilitation or return to training too soon can be predictive factors for recurrence.

On a different tack, statistics about the number of new injuries recorded at intercounty level in 2007 are raising challenges for GAA Central Council. The fact that between 1 in 6 or 1 in 7 players of each 32 person intercounty squad was unavailable for selection each week due to injury confirms the pressure on selectors in the presence of a reduced squad. In the light of this finding, the high rate of player layoff due to injury may ultimately suggest that a larger squad size may be necessary at this level.

Player welfare is at the core of this 2007 GAA Report detailing sport specific research on the number and type of injuries being sustained in our national sports. It is envisaged that it collecting this data will continue over coming years, including more counties each year. The findings will improve the game for all involved. Watch this space!

Our feet are amazing! Many of us spend hours every day on our feet with rarely a complaint. Yes, often at the end of a long day feet grumble in a way that makes taking off our shoes a distinct pleasure, but after even a short rest, the feet swing back into action and are ready for off again.

That is the beauty of perfect design. Unfortunately, either through incorrect loading, bad footwear or passed-on hereditary malformations some people have less than ideal feet. Sometimes it is the bone formation or architecture alone, sometimes poor muscle contraction or being overweight can bring on pain and problems.

Flat feet, bunions, hammer toes, skin rubbing or blisters, and callosities (rough skin) are all signs of foot dysfunction. Some of these signs can be corrected by a muscle strengthening programme, others need this and more, often in the form of a customised insole (known as an orthotic) in a shoe, that improves foot function.

So, what are orthotics? Well, the basic definition is that orthotics are inserts placed in the shoe to alter foot function.

The simplest way to explain what orthotics are and do, is to compare them to spectacles. Eyestrain develops from an inability of the lens in the eye to cope with the visual demands placed on them. The solution is to wear glasses which comprise a corrective lens. This external lens, working with the internal lens of the eye, together creates 20/20 vision and ends the discomfort of eye strain.

Orthotics support and alter the bony architecture of the foot so that the mechanical function of the region improves. This improves alignment of the leg to the foot and even up into the hip region, lower back and higher up the spine. Just like the spectacle wearer, improved function of the feet and legs results in improved muscle performance and general comfort.

Does everyone need orthotics? Again, just like with glasses, certainly not. Lots of people will never need orthotics. Even if feet are less than perfect, a very sedentary lifestyle where much of the day is spent sitting or mooching around puts minimal pressure on the feet. In such cases minor foot imperfections will not cause any problems and so can may not require correcting. Orthotics come into their own where people stand for prolonged periods of time or are on the move all day.

So how or where do you get orthotics? To return to the glasses analogy, nowadays while it is convenient to be able to purchase simple straightforward reading glasses in the pharmacy, if you need glasses for more than occasional reading you are advised to get prescription spectacles from a registered dispensing optician, who will measure the eye in detail to ensure that the glasses are a perfect match for your eyes.

The same is true with orthotics. Many pharmacists provide simple shoe inserts. Some offer computerised foot scanning but in either case this type of off the shelf orthotic is much less accurate than one prescribed by a podiatrist or chartered physiotherapists after a full foot and lower limb assessment. For best results assessment of function of the rest of the lower limbs combined with a measure of foot performance gives a more complete picture of dysfunction.

Assessment for prescription orthotics is done by a Chartered Physiotherapist or podiatrist. The assessment, prescription process and ongoing care may include a specific exercise programme tailored to the individual’s foot and leg dysfunction. Inserts can be made out of a range of different high performance materials, some better for one activity than another, so the physiotherapist or podiatrist will need to know quite a bit about the person’s lifestyle in order to make the best decision on their behalf. Orthotics can improve sports performance, whether it is in running type activities such as athletics, football or tennis or even straight-forward walking activities such as golf or hill walking. The type of activity, shoe style, age, weight and actual diagnosis are all important considerations in prescribing orthotics.

One final point of note. Orthotics act to control and improve foot function, in tandem with a well fitting shoe. A frequent question is as to whether a slightly bigger shoe is needed to fit the orthotic in. Even though there is limited space available for an orthotic within a shoe, purchasing a bigger shoe reduces the positive combined controlling effect of the shoe and the orthotic, so reduces the potential impact of the intervention.

The overall point of foot assessment is to restore full foot function, to bring back ‘happy feet’. The sooner sore feet and legs are professionally addressed, the better long term outcome in terms of degenerative wear on the joints of the foot, ankle, knee hip and even lower back.

Correctly prescribed orthotics, coupled with appropriate exercises and good advice can have a dramatic effect on quality of life and can prevent or reduce bone and joint damage in the future.